How can we help you today?

We are frequently asked about NestFab's Standard and Ultra-Performance nesting engines so we thought we'd write an article to compare the differences.

You can also try the software for yourself, including both Standard and Ultra-Performance nesting engines, by downloading a full free 7-day trial from the website.  Download the NestFab Trial

Perhaps the first question to answer is why do we have two nesting engines.

Why are there two nesting engines?

NestFab was launched back in 2010 as an affordable entry-level solution for those who needed an effective but easy to use nesting software.  This included the "Standard" nesting engine which we continued to develop.  NestFab quickly became the preferred software choice of those who needed to add nesting into existing workflows (i.e. design, quoting, production) or to upgrade the nesting of their machine bundled CNC software.  In 2015, we released our Ultra Performance nesting engine as an optional add-on to the NestFab license.  Why did we release it as an add-on rather than include it as standard?  From our initial comparisons, we quickly realized that Ultra-Performance was something special.  It was producing nesting results of a quality that far exceeded anything available on the market ... and was doing so in a fraction of the time.  This created a pricing conundrum as we had always positioned NestFab as a entry-level nesting software but the quality of the Ultra Performance nesting demanded a premium due to the huge cost saving potential with high value materials or large cutting volumes.  Ultimately, we decided to retain the Standard nesting engine as our entry-level offering and introduce Ultra-Performance with an extra cost for those who could justify that premium from the material and time cost savings that it provides.

With that answered, let's take a look into the differences between the two engines.

Nesting is one of the few software investments which provide a tangible cost saving each time it is used so one of the most obvious ways to judge nesting software is to examine how tightly it can arrange parts.  Ultimately, using less material comes straight off your bottom-line for producing those parts.

Our Standard nesting engine is quick and good but it is knocked out of the park by our Ultra-Performance nesting engine.  Typically, Ultra-Performance can reduce material consumption by as much as 10-25% compared to the Standard engine.  Of course, this does depend on the type and quantity of the parts being nested but even with only rectangular parts a good saving can still be made.

As with nesting efficiency, time taken is also of importance in dynamic work environments.  Both our nesting engines utilize "continual optimization" which means that our engines will keep looking for new improvements until you tell them to stop.  This ensures that you save as much material as possible for the time you are willing to allow based on your material cost or production demands.  Typically, the first nesting result will be produced in a matter of seconds and further improvements will be found as the nesting engines explore different combinations and placements of the parts.  Our Ultra-Performance nesting engine can nest thousands of parts quickly and efficiently.  The solution found by Ultra-Performance after 30 seconds is often better than Standard (and other nesting software) that has run for several tens of minutes.

Both nesting engines use ALL available CPU cores which simply means it can make use of 100% of your computer's processing capability to explore more nesting options to find you the maximum material savings.

Both nesting engines are able to rotate parts at single degree intervals. You are able to manually specify a rotational allowance for each part. The Ultra engine also adds an “Any” option. By using this, you let the Ultra engine determine the most favorable placement and rotation of the part, whether that be 90°, 30°, 12.21°, 0.1338° for example.

The Ultra engine also adds a rotational concept called "Tilt" which is useful when rotations are restricted to, say, 90° increments but where manufacturing tolerances allow for a small degree of additional rotation movement beyond these restrictions.  Tilt is a very useful option when you are nesting on to a grained or directional material as it can improve the nesting efficiency beyond what could be achieved without it.

Both NestFab Standard and NestFab Ultra allow you to specify the gap to leave between two parts and the gap to leave between parts and the sheet edge.  NestFab Ultra will keep to these spacing values exactly whereas NestFab Standard will only use them as a minimum.  This is because of some optimization "tricks" that are used in the Standard engine.  The Ultra engine works on a different principal so these tricks were not required.  This also means that Ultra Performance can nest parts that touch (i.e. 0 spacing) on both parts and sheets.  0 spacing is not possible with the Standard engine.

Best Efficiency utilises as much of each individual sheet as possible. It will generate the largest material savings with fewer nest repeats.

Prefer Repeats will place a strong bias toward repeating nests. This setting will aim to reduce the number of different sheet layouts at the expense of material efficiency. This is a useful option when programming your nests is time consuming.

Balanced Repeats uses a much higher threshold when deciding to repeat a nest at the cost of material efficiency.

The Standard NestFab engine includes a button which lets you simulate the same nest with the Ultra-Performance Engine.

We have included a few of the Ultra Nesting settings in this option. 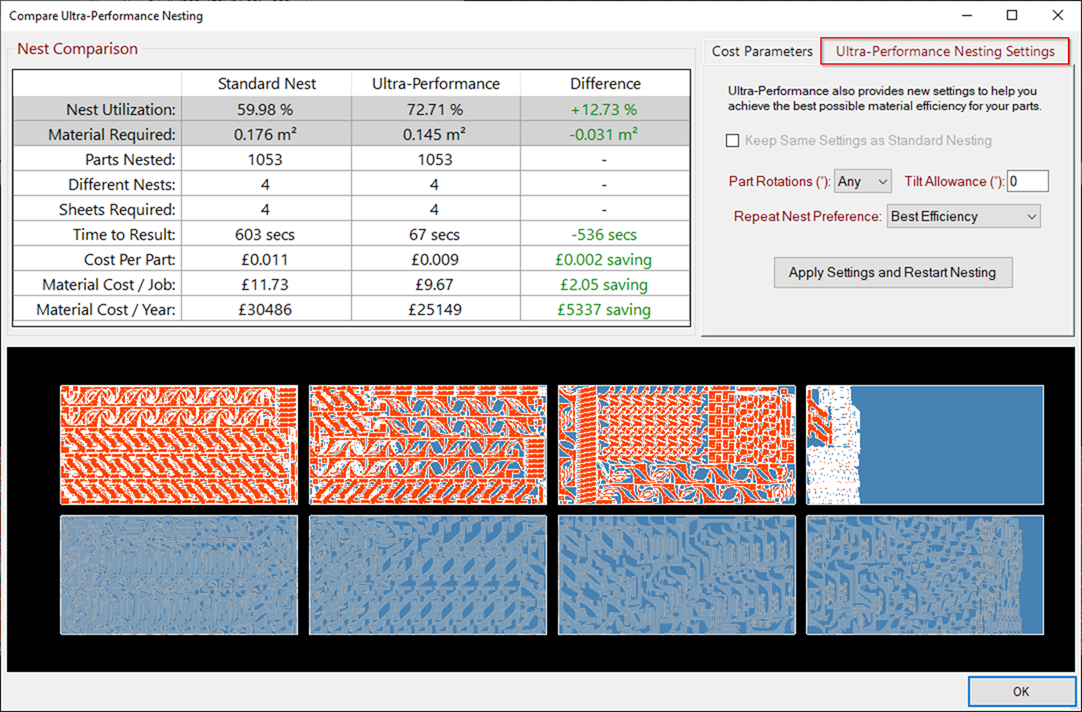 We also have included a basic cost-savings calculator. Simply enter the price of your sheet material and how many jobs you cut on average per day. 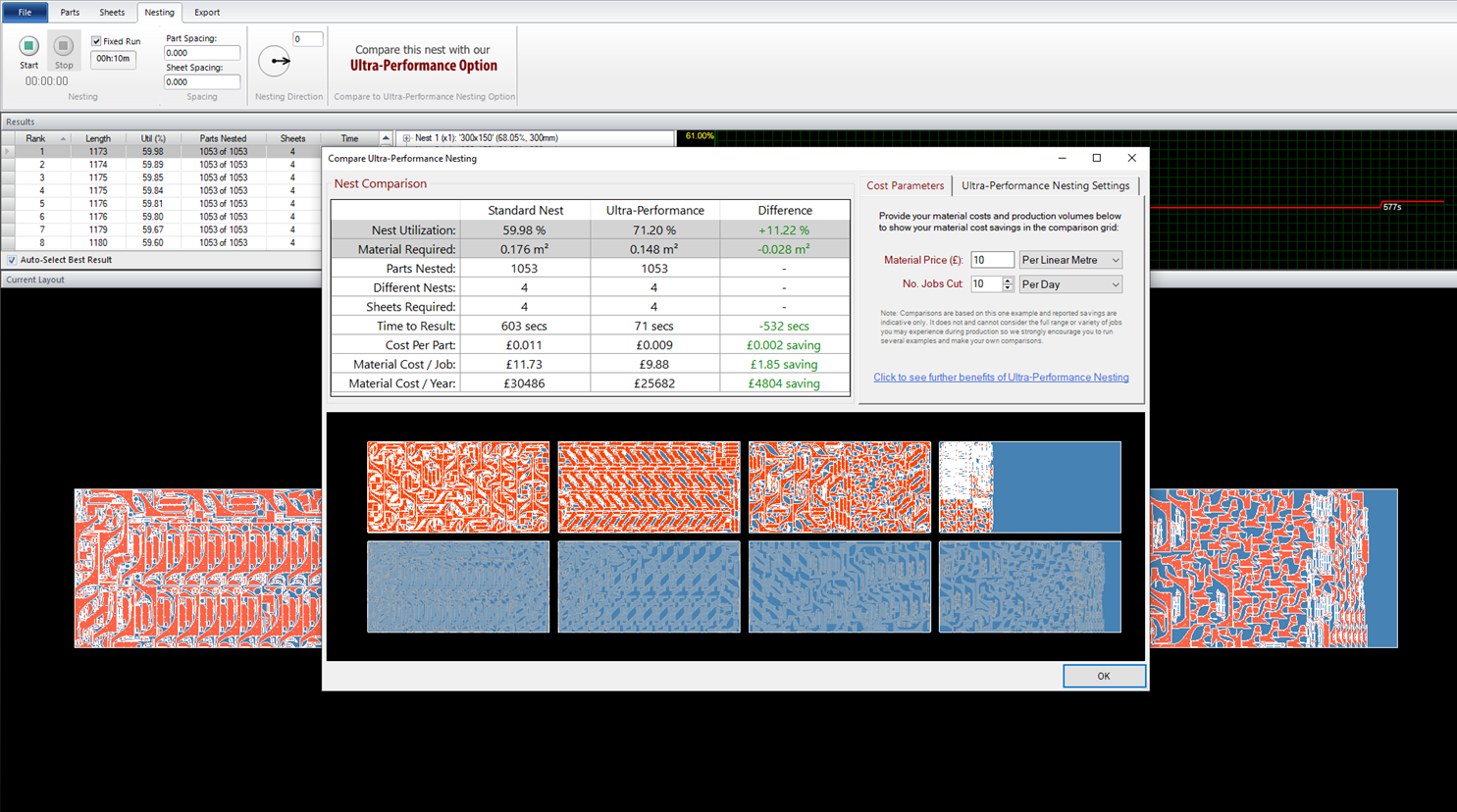 Thank you for reading this article. If you have any questions regarding the topics covered, please do not hesitate to contact us – support@nestfab.com

Did you find it helpful? Yes No

Send feedback
Sorry we couldn't be helpful. Help us improve this article with your feedback.